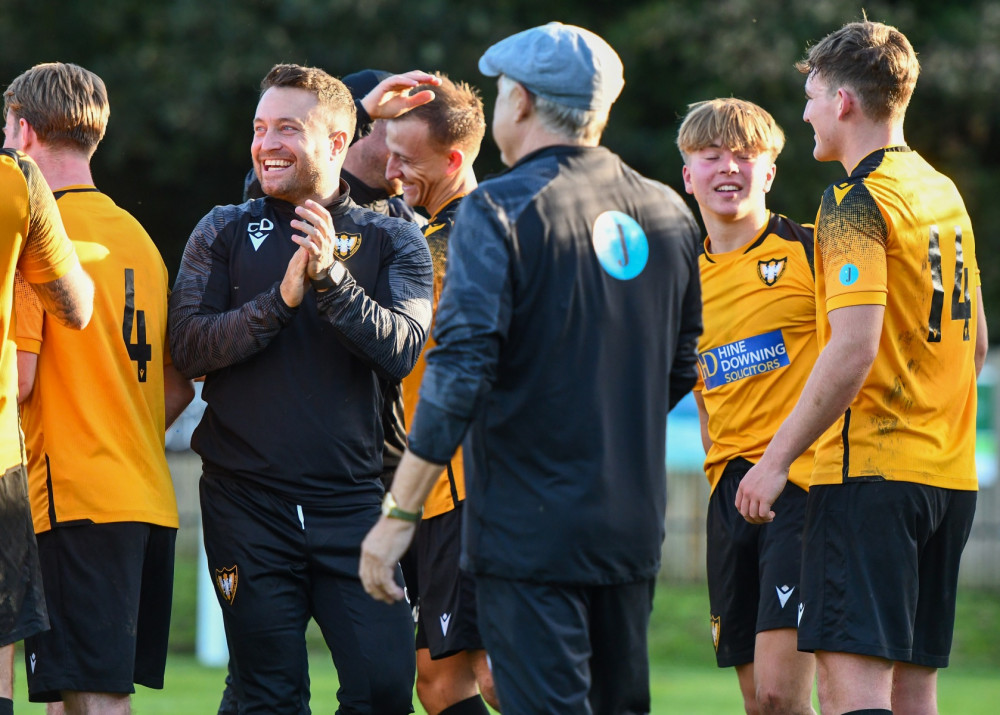 Falmouth Town manager Andrew Westgarth was 'immensely proud' of his side after they earned their first away win of the season at bottom-of-the-league Bitton on Saturday.

Luke Barner, Jack Webber, and Olly Walker scored for Town as they triumphed 3-0 at the DL Brickwork Stadium to clinch their first win away from Bickland Park this season at the eighth attempt.

Barner opened the scoring after ten minutes when he met Walker's low cross at the near post and flicked it past Ton goalkeeper Kai Wilson for his third goal of the season.

Town doubled their advantage early in the second half despite the best efforts of Wilson, who saved Alex Wharton's strike and Barner's follow-up before Webber eventually tucked away the rebound from ten yards to open his account for the 2022/23 campaign.

Westgarth's side finally made the points safe a couple of minutes before the end, with returning skipper James Ward nodding down a cross for man-of-the-match Walker to rifle into the net.

The win – Town's third on the bounce in all competitions – puts Town up to 12th in the Western League Premier Division, above rivals Helston Athletic on goal difference and just three points off the top seven.

"Being brutally honest, going into the game there was a bit of pressure on us because we haven't won away from home and we're playing against a side who are bottom of the league – everyone just assumes you're going to win," Westgarth said after the game.

"There was a lot of pressure riding on us but I thought we were brilliant. I think it was a complete performance. We steadied the ship a lot, and I know I've repeatedly said it but it's true: we've had one defeat in eight now and it's all looking a lot more positive.

"I was immensely proud of the boys at the weekend, because getting wins at any stage of the season is difficult, especially on the road, so the boys deserve massive credit."

He added: "It was always going to take a bit of time to adapt to the league. I think every game we've played this year we've been in the game, so it's not like we were getting pumped. We always knew as a club and as a group that once we've clicked we'll be fine. We were never at panic stations, which was the pleasing thing.

"It's an unforgiving league but it is a brilliant league. You're playing against a side that are bottom of the league, and no disrespect to the South West Peninsula League but you could rotate [your team] and you'd know the game could be over with a couple of goals, whereas on Saturday, as much as I thought 3-0 was a bit flattering for them because we had chances, you're in a game right to the end and full credit to them for that. When you get the wins they are celebrated so much more because you've got to work really hard for them."

The cherry on top of a fine Saturday afternoon for Town was the return of captain James Ward, who made his first appearance since the end of August after seven weeks out with a hamstring injury.

After watching the last eight matches from the sidelines, centre-half Ward came off the bench in the 80th minute of Saturday's game as a late replacement for James Swan, and made his presence felt almost instantly by teeing up Walker for Town's third and final goal.

"I'm delighted for him and within two or three minutes of coming on he's set up Olly Walker with a goal," Westgarth said. "That's what Wardy brings to the team so it's massive for us to get him back.

"Honestly, you couldn't have asked for a better weekend. Jack Bray-Evans is obviously our talisman but it was great for Barner to get a goal because he's needed some goals.

"It was great for Webby to get the goal he's deserved for his start to the season, and a clean sheet for Barnesy [goalkeeper Ryan Barnes]. That's two clean sheets in a row now, two wins in a row [in the league] and the confidence within the group is definitely there."

Town are back in action on Saturday when they welcome Helston Athletic to Bickland Park in the FA Vase first round proper (kick-off 3pm).