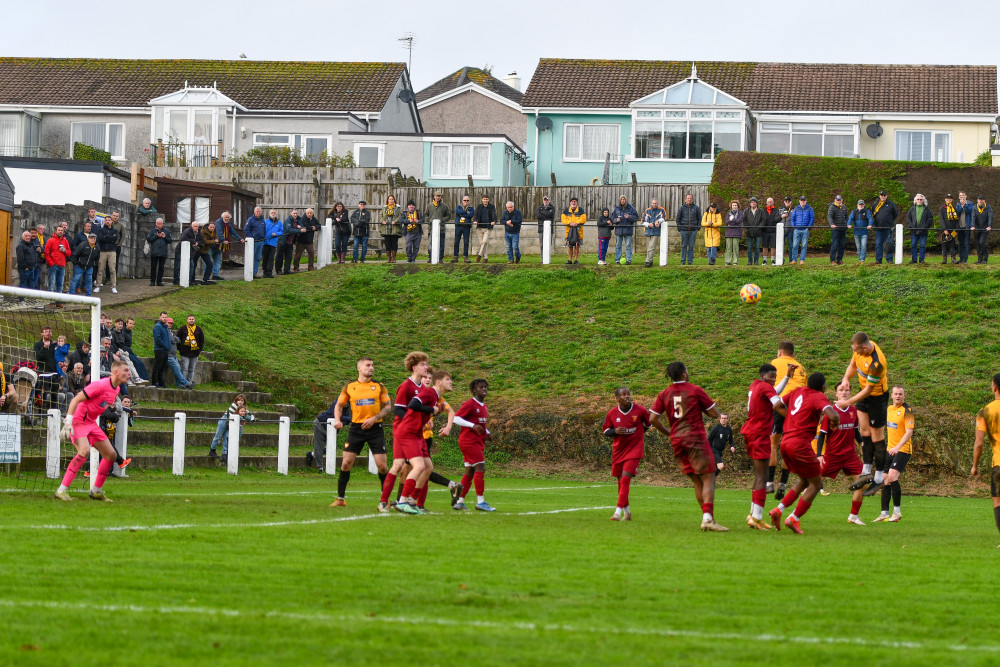 Falmouth Town surrendered a two-goal lead to draw 2-2 at home to Keynsham Town in their Western League Premier Division encounter on Saturday.

Jack Webber's fine finish midway through the first half put the hosts in front at the break before Jack Bray-Evans doubled the lead fewer than 20 seconds into the second period.

Owen Brain gave the Ks a lifeline midway through the half when he fired in from outside the box, and the same man – who also saw red for the visitors late on – snatched a point for the Somerset outfit 13 minutes from time, slotting in from close range after his first effort was saved.

The draw brings Town's three-game winning run to an end and means they remain 14th in the Western League table. Keynsham stay bottom but only goal difference separates them and Torpoint Athletic.

Keynsham forward Jemar Thomas looked to surprise Town with a shot inside the first minute before the in-form hosts quickly put their stamp on proceedings. Bray-Evans fired one shot over before Ks gloveman Joel Manning blocked the Town man's backheel from point-blank range.

A goal had been coming and it went the way of the home side in the 21st minute. Brabyn surged into the box and his intended cross for Bray-Evans took a deflection and fell for Webber, with the midfielder striding into the box and drilling the ball into the roof of the net.

Town quickly searched for a second with Bray-Evans shooting into Manning's arms following a good run before Brabyn's close-range finish was ruled out for offside, having turned James Ward's header past Manning at the near post.

Ward passed up two opportunities to put daylight between his side and the visitors before the break, sending a bullet header at Manning from a corner before shooting over from the centre of the box shortly after.

But Town wasted little time in extending their lead after the turnaround with the home side finding their second goal only 20 seconds into the second half. From the kick-off, Town quickly worked their way forward with Bray-Evans meeting a low cross and turning it past Manning from six yards.

Town then almost made it three when Ward thundered a header against the crossbar, and that proved crucial as Keynsham halved the deficit a few minutes later. Kyle Anderson's free-kick struck the Town wall and Brain was on hand to rifle the rebound into the bottom corner.

Bray-Evans was then guilty of missing a golden chance when he blazed over from Olly Walker's cross, and the hosts were made to pay again as Keynsham hauled themselves level out of nowhere. Brain's close-range shot was saved by Ryan Barnes but the Ks man was able to slot the rebound in from a tight angle.

Brain almost completed a remarkable hat-trick soon after but saw his effort denied by Barnes' feet, and that was his last involvement before being shown a second yellow card for a foul on a Town player.

With the extra man, Town pushed forward to try and rescue all three points but to no avail. Ward had another header saved while Bray-Evans' late effort was chalked off for a foul in the build-up.