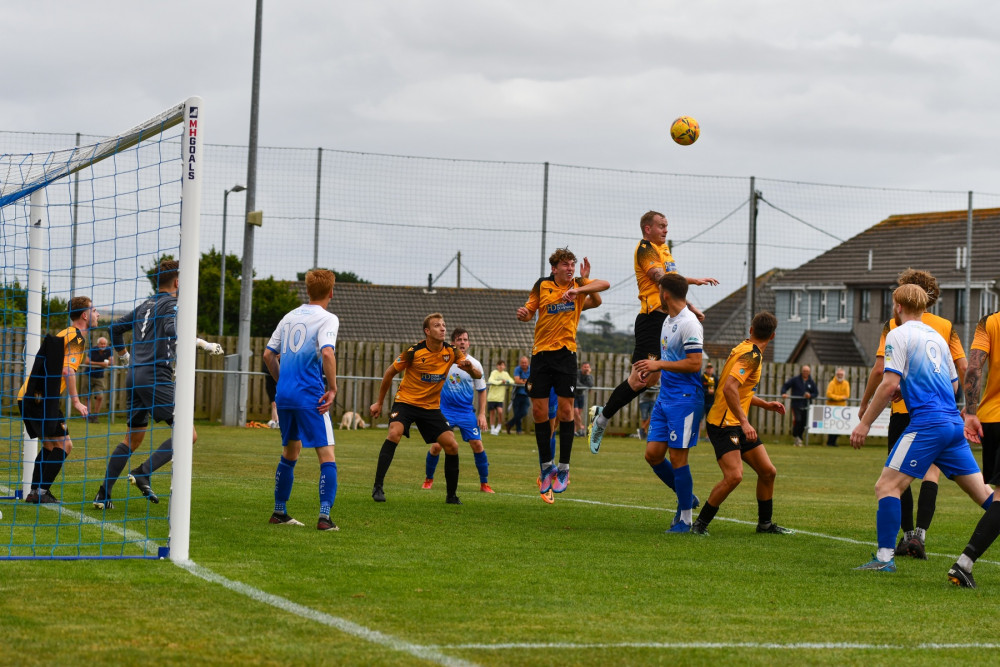 Falmouth Town will be hoping to finally get one over local rivals Helston Athletic once again when the teams meet at Bickland Park in the FA Vase first round proper on Saturday (kick-off 3pm).

Andrew Westgarth's side are enjoying a run of just one defeat in their last seven games and a 3-0 win at bottom side Bitton last weekend saw Town record their first victory away from Bickland Park – only for the South Gloucestershire side to withdraw from the Western League earlier this week to render that win null and void.

Town now return to the home comforts of Bickland Park – with Town winning seven and drawing two of their ten home games thus far – where they will aim to end another unwanted run: victory on Saturday will see Town's winless run against the Blues come to an end at five games.

You have to go back to November 2019 for Town's last win over Helston, when a David Broglino hat-trick helped Westgarth's side to a 3-2 triumph over Steve Massey's Blues in the third round of the Cornwall Senior Cup. Since then, Town have lost four and drawn one of their five meetings with their local rivals, with two of those defeats coming earlier this season.

Town have seen off South West Peninsula League Premier West sides St Austell (3-1) and Launceston (5-0) to reach the first round proper for the fifth year running. Helston, meanwhile, began their campaign with a 2-1 win over fellow Western League side Saltash United.

Helston are led by Matt Cusack, who joined the club in the summer after former boss Massey stepped down to focus on his director of football role. The Kellaway Park outfit have enjoyed a fairly promising start to life under former Saltash United chief Cusack, with the Blues losing just one of their first nine Western League Premier Division games while also reaching the FA Cup third qualifying round for the first time.

But their form has dipped somewhat in the last couple of weeks, with a 4-0 loss at Buckland Athletic two weeks ago being followed by a 2-1 reverse at home to Saltash last Saturday. That had seen Town overtake Helston in the league for a couple of days, only for the Blues to climb back above Town following Bitton's withdrawal.

Helston have scored 32 goals in all competitions this season, with Rubin Wilson leading the way with 12 strikes in 19 appearances, while Rikki Shepherd has netted eight times.

"Our record against them is so poor. We haven't won in a couple of years, I think it's three years since we've beaten them and nearly five years in the league. A lot has happened since we last beat them.

"[We're in] conflicting form, really. I know they've had some big games like Weston-super-Mare and I know they beat Torpoint on penalties [in the Senior Cup] but over 90 minutes they still didn't win and obviously they're coming in off the back of two defeats in the league. I'm not sure whether this is a welcome distraction or a game they probably didn't need, so it's all set up to be an intriguing game.

"[Bickland Park] is a fortress for us in general and in the Vase, we've got a really good record at home, so something's got to give.

"It's a shame that all of the Cornish sides can't be kept apart [in the early round of the Vase] and they can have their own individual stories to tell and different memories, but it is what it is and I'm sure it'll be a bumper crowd as always. Just like every game [against Helston] I'm sure there'll be a bit of controversy and I'm sure it'll be end-to-end."