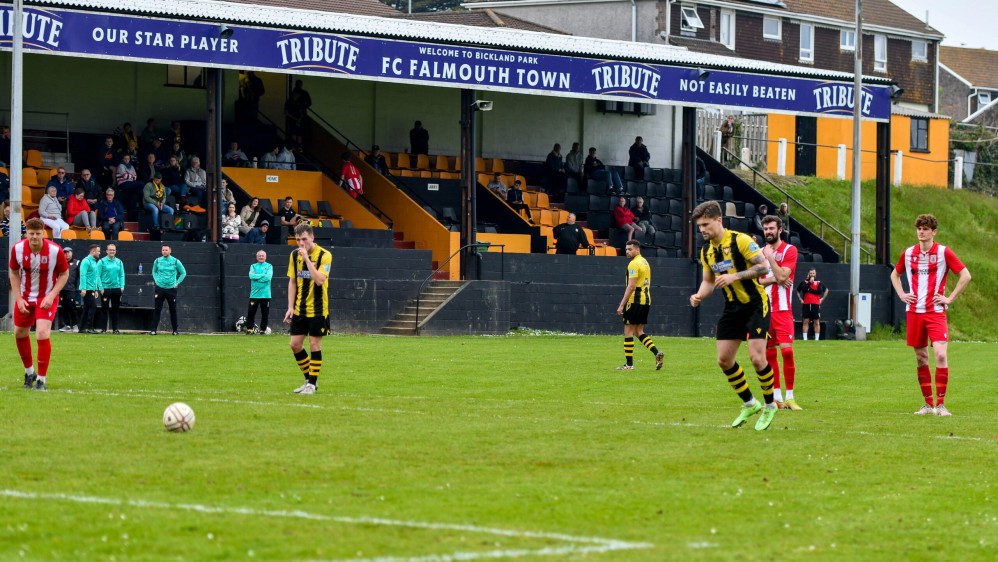 Falmouth Town eventually overcame a stubborn Newquay side as the newly-crowned league and cup champions recorded a 3-2 victory at Bickland Park on Saturday.

Luke Barner opened the scoring for the hosts after 22 minutes with his 20th of the season, and while the Peppermints soon hit back through Jacob Grange's deflected effort, Tim Nixon was on hand to fire Town back in front within two minutes of the restart.

Cam Turner restored parity from the spot ten minutes after the interval, but Town were awarded their own spot-kick when Tom Annear was struck by the high boot of Jacob Grange, who was given his marching orders as a result.

Following a lengthy stoppage as the centre-back received treatment, former Newquay man Jack Bray-Evans stepped up to drill the ball past former team-mate Jack Heaton to secure his new side's 29th league win of the season.

Andrew Westgarth made three changes from the side that started their Cornwall Senior Cup final triumph over Wendron United on Easter Monday, with Ade Thompson, Alex Wharton, and Scott Kellow coming in for Kirk Davies, Luke Brabyn, and David Broglino.

Town were keen to show there was no hangover following a mentally and physically taxing Easter weekend and came close early on when James Ward's back-post header was cleared off the line.

Nixon had one effort blocked before the winger turned provider for the opening goal. Bray-Evans put Nixon through on the left flank and the latter surged to the byline before squaring for Barner, who rifled the ball into the far corner.

Clearly intent on bagging against his former club, Bray-Evans took aim at goal three times in quick succession, forcing Heaton into a pair of stops before firing the third wide of the target.

All of a sudden the Peppermints found themselves level, and in fortuitous circumstances, eight minutes before the break. Grange cut inside from the right and drove the ball at goal, with the effort striking Ross Fallens and looping over the head of Town custodian Ryan Barnes.

But Town did as they so often have done this season and restored their advantage almost instantly. A quick attack resulted in Alex Wharton sliding the ball through for Nixon, who coolly slotted past Heaton for his 18th goal of the campaign.

A quiet start to the second stanza soon burst into life in the 55th minute when Barnes was forced to parry Fallens' powerful strike, and in trying to reclaim the ball, felled Peppermints man Connor Wharton. Turner made no mistake with his kick, sending Barnes the wrong way.

The home side were given their own chance to score from the spot, and reclaim their lead once again, five minutes later. Heaton did well to save from both Annear and Nixon in quick succession, before Annear was clattered by the high boot of Grange.

The tackle earned the Newquay man a straight red card, and following a lengthy stoppage as Annear received treatment before walking off the pitch, Bray-Evans took responsibility from the spot and hammered the ball home for his 39th of the season.

Ten-man Newquay now had their work cut out to contain the champions for the remaining quarter of the game, with Wharton missing the target before Tom Whipp provided a vital interception to take the ball away from Bray-Evans, who seemed destined to tap home at the back post following a swift counter.

The Peppermints had Heaton to thank for pulling off a fabulous save to tip Bray-Evans' latest effort over the bar before Wharton volleyed wide soon after.

A fourth goal was proving elusive and Town had to be careful not to let another in at the other end, with Tom Shepherd forcing an important stop out of Barnes.

Town continued to plug away during the lengthy period of stoppage time but could not add to their tally, although it mattered little as, for the 29th time in 30 league games this season, the points were secure.

Leading side to the double ‘hasn’t sunk in yet’, says Falmouth captain Ward